Football night in the Guadalajara UFO

The way people experience their football matches tells a lot about that society itself. German football has singing, beer-drinking and sausage-eating fans on terraces. And Mexico? Get ready for a night of samba and for on-your-seat catering in the futuristic flying saucer of a football stadium in Guadalajara.
Faraway, so close. Wim Wenders’ movie is in the back of my mind all the time on this sunny sunday January afternoon. I should of course have learned from previous travel experiences. From that other Sunday afternoon in Moscow, where the skyscrapers looked so close. But ninety minutes later it seemed I still hadn’t made any progress.

The road to this Guadalajara stadium feels similar. Take the metro bus from Parque Revolucion westwards. Exit near the Parque Funeral Colonias. Cross the big street and you can already see the Chivas Stadium.

What the map didn’t really tell me, is that the big street is an almost impenetrable highway. One of the few bridges across is only reachable by walking thirty minutes from the closest bus stop, through an area of town that would be called a favela in other countries. Cobblestone streets, ramshackle houses: this ain’t an area to be left to your own devices at night.

Once you make it across the bridge, you’re close but of course still pretty faraway. The buildings of the justice department and the university block the view of the stadium, and obviously there is hardly any walkway in sight. Mexicans look weary at the foreigner in shorts (in January with 25 degrees celsius, he must be crazy!). And once you finally make it around the corner, away from the highway, the sight of the stadium is almost a fata morgana. Rising from the earth, with a grass surface growing on its concrete exterior, and finished with a mathematical perfect saucer almost hovering on top of it. This is indeed almost a UFO.

The Chivas stadium is a peculiar one. It is almost American from the outside. A location near the highway, with a huge parking lot. Far away from the city center. There is a pre-match programme going on right in front of the gates. The only things that are missing are SUVs and barbecues[/highlights], otherwise you would almost assume you are going to an American football match.
That all changes though once you pass the gates. The service level is still not very Mexican-like: well-organzied, with club merchandise shops all around, and food and drink stalls on the concourses. This feels all very modern and you can see why FIFA prefers this stadium for the World Cup 2026 over the grand old Estadio Jalisco much closer to the city centre.
But inside a mariachi band is awaiting us for a welcoming serenade. Quite a way to soothe you into a gentler, more Mexican mood. The locals slowly – slooooowwwwwwly – take their seats, waiting until the sun sets. And close to kick-off actually 70 to 80% of the 49,000 seats appear to be occupied.

And the vibe gets more Latino by the minute. It isn’t as boisterous and loud as in stadiums in Argentina, but the home fans actually have a standing section where they gradually increase the pace with their samba and relentless chanting. It obviously has no effect on the pace on the pitch: this is some slow-motion Mexican futbol, taking a full hour before the match really ignites.
Until then the biggest entertainment is actually a continuous, relentless flow of catering personnel asking almost every minute whether we want a burger. Or fries. Or chips. Pizza maybe? And we look absolutely thirsty and need an extra cerveza, right?
My neighbor, at least 30 kilograms heavier than me, never ceases to amaze me. As a season ticket holder at Union Berlin I am used to more-than-moderate amounts of alcohol consumption. But this guy manages to down between 5 and 6 beers (half a litre each) within two hours. Impressive. You just wonder how he is going to drive home. Because, yes, driving is almost the only feasible option, it turns out, but more on that later.

What could possibly go wrong?

Anyway, back to the match inside the beautiful bowl. Around the hour mark the crowd, until then pretty laid-back, erupt for a first time. Striker Alan Pulido turns around and finishes clinically in the left bottom corner, putting the home side up 1-0 against regional rivals Toluca. What can possibly go wrong?
Well, with a defence like the one from Chivas a lot, apparently. Within fifteen minutes the finally awoken opponent manage ten shots on goal. They even equalize, but after a terse and record-breaking seven minutes of VAR (Video Assistant Referee), lots of protests from Toluca and a referee that looks at the video footage himself, he decides in a beautifully theatrical way that the ball hadn’t crossed the line after all. So the crowd erupts again, even more ecstatically then when their own side actually had scored.

Quite some excitement for a sunday night. So as the home fans start their songs of victory, and try to humiliate their regional neighbors, I exit the stadium and am impressed by the beautiful ring hovering over the stands. An image that will probably stay in my memory for the rest of my life.
The rest of the evening will stay in the same spot of my brain as well though. Because, obviously, there is no need to connect a 50,000 stadium to local transport, right? To be honest, I had been researching for solutions before the match and couldn’t find any. So decided to push the problem forward and was hoping for lots of good luck.
Well, that was hopelessly naive of course. No bus connection in sight, at least for non-Spanish-speaking people there was no sign of that. And the decision to walk back to the Concentro bus stop turned out to be… a bad one.


It took more than an hour, and some walking on the edge of a six-lane highway, and the crossing of several dangerous roads, to finally get there. Obviously, the metro bus was only running every thirty minutes at this late time of day. So the faster choice was to just hop on to one of the local buses (the ones that are almost falling apart, and are without exception driven by a friendly moustached old Mexican).
And then check on your Google Maps whether this one was actually driving in the proper direction. As by wonder, I finally exited the bus 40 minutes later, at Parque Revolucion. Time for a last torta. A last smile, thinking of the memories of the day. And with the loud ‘Chivas’ chants in my head finally falling asleep. 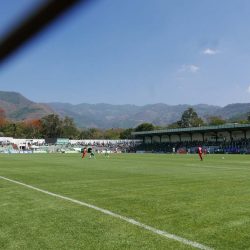